Slowly, ever so slowly, I am returning to working on the Adelaide book project after couple of years.  We  left  living in Adelaide's CBD about   3 years or so ago, and shifted to living on the southern Fleurieu Peninsula coast. Most of my daily photography on the poodlewalks  now happens along  the coast, whereas when we lived in Adelaide,  the daily photography emerged from walking the CBD with the poodles.

Adelaide's  CBD has changed since 2016.   What is noticeable to me as a visitor about the  new development in the CBD  is the increase in both the high rise apartments and the coffee shops/cafes.  Adelaide is becoming post-industrial. 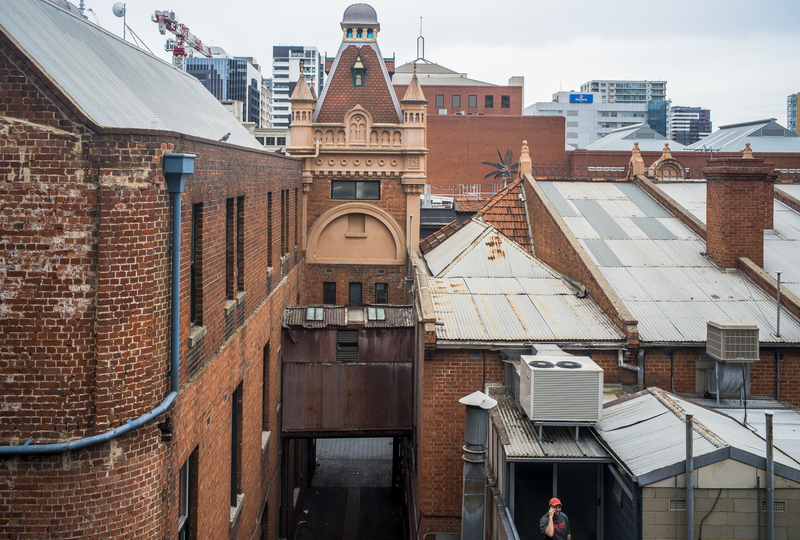 Occasional day trips to Adelaide are all that I can  do these days, and this particular trip  was designed to  pick up the photography from where I had left off 3 years ago.  This photo was made on a day trip to Adelaide when  I was able to spend some time wandering around the  CBD as a flaneur.  The above picture was taken from a car park  behind the back of The Austral Stores building in Hindley St.

The Austral Stores building is also known as West’s Coffee Palace, and it was designed by Albert Selmar Conrad.  He designed the  space for twelve shops and dwellings, including bakers, a tailor, a cabinetmaker and his father’s butchery with yards at the rear of the building.  I think that the interiors are  pretty run down--as is Hindley St  itself.

It is the north western part of the CBD that is changing rapidly, largely  due to the  ever  increasing footprint of the University of  South Australia and the various buildings that now constitute  the health precinct on North Terrace. Large high rise blocs of student apartments are  being built.